At the start of 2010, approximately 5,000 Argentineans were living in Germany, making them the third biggest group of emigrated South Americans, after the Brazilians and the Chileans, according to the registry of the Federal Statistical Office of Germany.

The numbers provided by the German authorities show that most emigrated Argentineans are relatively young and that there are slightly more women than men. With an average age of 38 years, , although the majority has been living here for more than a decade. Nonetheless, a visit to one of the four consulates of the Argentinean Republic in Germany shows that the numbers and identities of these immigrants can vary.

In the consulate in Frankfurt alone, (which is responsible for nationals living in the German states of Bavaria, Baden-Württemberg and Hesse), approximately 5,000 Argentines are registered, the specialist of the Center of Commercial Promotion in Frankfurt, Marina Lasagna, told Deutsche Welle.

Furthermore, there are another 3,500 Argentinean residents registered either in the consulate in Hamburg (responsible for Schleswig-Holstein, Mecklenburg-Vorpommern, Lower Saxony and Bremen) or in Bonn (responsible for North Rhine-Westphalia, Rhineland-Palatinate and Saarland).

“Not everyone is registered...”

Perhaps because of her Italian passport and origin, Lasagna herself is an example of the difficulty in finding Argentinean traces in Germany. “Many possess the German passport, others the Italian passport, and some even have a Spanish passport,” said Manuel A. Fernández Salorio, General Consul in Hamburg. Most of them master the German language. “We are very integrated in the German society, it’s hard to find us,” commented Mariana Llanos, a German-Argentine political scientist of the GIGA Institute in Hamburg. 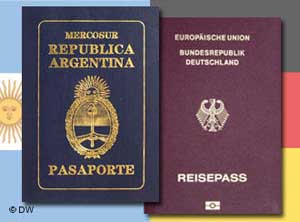 There is no nationality agreement between Argentina and Germany, but the Argentinean citizenship is non-renounceable.

Argentina has no agreement on double nationality with Germany, as they do with other European nations (Italy, Spain, Norway and Sweden) or with Latin American countries (Colombia, Chile, Ecuador, El Salvador, Honduras, Nicaragua, Panama and, in part, the United States.

Between dictatorship and economic crisis

Not only do the personal motivations differ among the Argentine migrants, but also the social and professional composition. According to the consul in Hamburg, there are academics such as postgraduate students and doctors, as well as musicians, artists, ballet and tango dancers, entrepreneurs, employees, journalists, athletes, and housewives living with a German partner. “We also have many engineers working for Siemens or Mercedes Benz,” said Guillermo Atlas, associate at the Center of Commercial Promotion of the Frankfurt.

Many political exiles, especially students and academics who relocated to big cities like Berlin, Frankfurt or Hamburg during the last de-facto-government in Argentina between 1976 and 1983, returned to their country, once democracy had been installed there. Others managed to make their home here, sooner or later. Atlas himself settled in Germany after spending eight years here as an exile and a student in the late 70s and then temporarily returning to Argentina for five years.

Some Argentines, as well as Chileans, have “biographies that sum up quite well the history of the 20th century”, Atlas said: “Many Argentines of Jewish-German origin, who escaped the dictatorship in the 70s and 80s, were sons and daughters of those Jewish-German immigrants who had arrived in Argentina escaping World War I or II, escaping Nazism…” In Germany there even exists a “Coalition Against Impunity” which demands justice for some 100 disappeared people of German origin.

“Other migratory waves are related to Argentina’s economic cycles,” Atlas and Fernández Salorio confirm. According to German statistics, the latest record of arrivals from Argentina occurred between 2001 and 2003, the time of the economic meltdown. The consulates in Bonn and Hamburg confirm those statistics.

Between art and Bundesliga 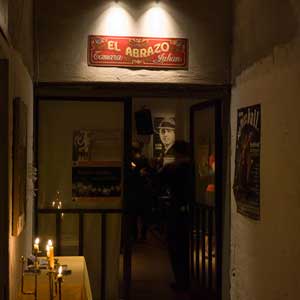 Tango schools have boomed in Germany over the last years.

Furthermore, “Argentina offers excellent musical education, and Germany is like paradise for musicians. Here, you have a choir or an orchestra in every town,” Guillermo Atlas said. . This has attracted personalities such as Pablo Assante, director of the Semperoper choir in Dresden.

There are many Argentines working in the cultural and academic fields in Germany. The conductor of the Hamburg Ballet, Eduardo Bertini, the artists Miguel Rothschild and César Lozano, the writers María Cecilia Barbetta and Marta Kapustin, movie directors Ciro Cappellari and Jeanine Meerapfel, dancer and choreograph María Colusi, dancer and tango teacher Fabiana Jarma, journalist and Human Rights activist Osvaldo Bayer or the former ambassador and philosopher Ernesto Garzón Valdés, to name a few celebrated people.

Tango schools, as well as business involving tango accessories, have boomed among the Germans lately, Atlas claims. Dancing tango, milonga or sharing other traditions always bring many emigrants in “Argentine centers and circles” all over the country. Equally appreciated by the Germans is the quality of the Argentine steakhouses, although their owners are not always from Argentina.