As long as I feel good here, I will stay

She's a seamstress, costume designer, model builder, and a tango enthusiast; an artist and shop assistant; and German Argentine or an Argentinean German: Victoria Bürgin lives in Hamburg and is many women at once. 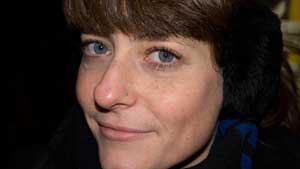 “You are what you think you are.” says Victoria convincedly, while she shields her ears from Germany’s cold temperatures.

“At home, we used to talk a German-Spanish mix with my mother. My friends used to make fun of us. We were speaking an unthinkable language,” Victoria Bürgin says in a heavily accented Argentinean Spanish. She was born in Buenos Aires thirty years ago, she settled in Germany seven years ago. In a way, she set off on her forefathers’ return trip. Her great-grandparents, of German, Austrian, Hungarian and Syrian origin, had wound up in Argentina around World War II.

Her German-speaking grandparents kept the family bi-cultural and bilingual. The Syrian grandfather, educated in an English boarding school, also insisted on having Victoria's mother learn a third language. “My mother spoke very good English, but my English is not good,” Victoria laughs. Like her parents, she attended a German primary school. “We used to blow out little cotton dabbers!” she says with a hearty laughter while taking a deep breath and demonstrating the difference between the German “h” and the Spanish “j”.

“When I came here I worked in a restaurant, in a bakery, and I also worked as a babysitter.” Settling in Germany in a legal way was no problem, as she also possesses a German passport. However, she spent the first year searching for “anything to study anywhere”, until an old friend took her to the employment office looking for information on the different types of technical or academic teaching. “I did not find anything because I didn’t know the correct terminology in German, and I did not know anyone who could tell me about it.” 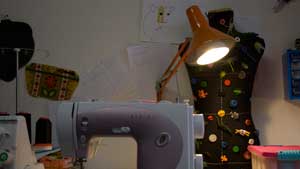 Victoria Bürgin has enjoyed sewing for more than 15 years

After the death of her mother, Victoria visited Southern Germany during her first trip to Europe as an 18-year-old. In Munich she perfected her German and planned to return to Germany for a postgraduate program once she finished her fashion design studies and her theater costume and make-up courses at the San Martín Theatre. However, her savings diminished due to the Argentinean financial crisis in 2001, so she chose to go to Germany in 2003 before the US Dollar devaluated the Peso even more. This time, she chose to live in the north, right next to the Hamburg harbor.

She studied costume design for cinema, television, theater, opera and ballet while earning some money sewing for her professor’s clothing company. That’s when she met Carlos, an Argentinean socio-economist with whom she shared five and a half years of her life in Hamburg’s “Owl Street”, close to the Elbe river.

For the past year she has been sharing an apartment with a friend called Esther. In the basement, where the windows face the street, she shares a studio with other friends. They exchange ideas, organize fairs and expositions in order to show and sell their creations. Together with Angie, an Argentinian collage artist, they meet with members of “Manos Migrantes” (Migrant Hands) once a week. “Manos Migrantes” is a group of Latin women supporting each other in order to develop their labor skills in very small companies or independently.

Victoria who loves motifs of insects, “hums” around two sewing machines, several pin boxes and color brooches, cupboards and boxes with textile designs, architecture books and music from Buenos Aires. In a huge panoramic photo, dozens of couples are seen dancing tango in the streets of the city and she dances with them. This happened during the semester spent in her native city, while she was looking for inspiration for the dresses and models of her diploma thesis: “Buenos Aires is like a tango: dresses and facilities of a city and its culture.

“Studying costume designs allowed me to get to know different techniques and work with diverse materials.” Victoria does not limit herself to being just a designer: “I consider myself a constructor. I create clothes, models, objects.” Her designs look for solutions to the German winter without neglecting her Latin origin: polar necks, coats and vests, “pulse warmers”, “kidney warmers”. “I create these things because it’s cold here and people use them a lot.

An artist in a café 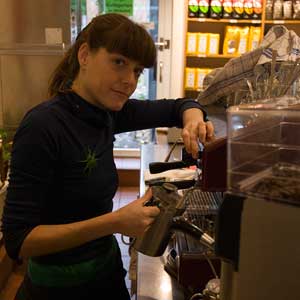 Besides painting and creating clothes and objects, Victoria works in a café.

In her spare time, she plays volleyball, takes Tango classes, paints and draws “living models”. “For a long time I hadn’t felt like painting, because for me, only artists were able to paint. But, in reality, who is an artist, and who isn’t? You are what you think you are,” she says in a convinced manner.

For now, her “stable job” is not as a seamstress, designer or painter, but as a waitress in a mutual Fair Trade Coffee association with Latin America: ‘El Rojito Café’. “All of us who work there and coordinate this business form a big family which I can turn to whenever I need something.”

Only a 40-minute car ride away lives an aunt, her close link to Buenos Aires, where her sisters, her father and old friends still live. Paola, her best friend in Germany, has just returned to the Argentinean capital after many years of trying her luck in Germany. “In the end, that’s what she did: packed her bags and took off,” Victoria nostalgically remembers. She tries to spend a few months in Buenos Aires every year, “but my life is here, and as long as I feel good here, I will stay.” 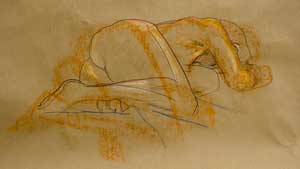 Every Monday night, Victoria meets with a group for a drawing of ‘living models’.

Raised between the Argentinean culture and the family effort of maintaining the German culture abroad, and having lived in Hamburg since 2003, Victoria Bürgin feels “90% Argentinean and 10% German”.