A cosmopolitan artist in Berlin

The weekend flea market at Berlin's “Mauerpark”, a public park adjacent to the site of the old Berlin Wall, is a paradise for bargain-hunters. On a recent Sunday, the sprawling and chaotic market was throbbing with music, the smell of food and the sounds of people from the most diverse backgrounds, nationalities and social classes. The stands sell everything from valuable antiques, hand-made clothes to cheap plastic souvenirs.

It's this “luxury of trash” that Alex Flemming, an internationally renowned Brazilian-born artist, likes to immerse himself in on weekends when he is in Berlin. The open-air market, he says is the face of his neighborhood, Prenzlauer Berg which has long provided fertile ground for a dynamic arts scene. It's located in the former Communist eastern part of Berlin.

“I like East Berlin, for me that is the real Berlin,” Flemming says. “Until now, life has been quite charming here.” He compares the district to Mitte, another eastern Berlin neighborhood, that has become upmarket and chic in past decades. “ Mitte is an uptight place, bourgeois and without space for big adventures,” he says.

An official invitation from East Germany first brought Flemming to Berlin, a then divided city, in 1986. Flemming's grandmother was German and he wanted to get to know life on the other side of the Iron Curtain. However, he returned to Brazil after just six months, disappointed with the East German Communist regime which he described as “a dictatorship worse than the Brazilian one.”

Flemming believes that content and concept are essential for art, “in order to avoid creating something that has already been created. The work of art needs to take you a step forward,” he says. However, color and form are equally as important – as is beauty. 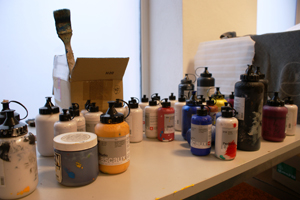 “I believe that beauty is fundamental. Even when I talk about wars, when I speak against torture and the terrible things that happen in this world, the final work of art condemning those things needs to be beautiful, seductive, marvelous and dazzling,” Flemming says. “In this aspect, I am – maybe not a revolutionary person – but a classical person.”

Other themes that have kept Flemming busy over the last couple of years are body, religion and architecture. “Those three things are, in my opinion, very interconnected,” he says. “ For me, the human body is the center of the universe. That is where the idea of preserving the human body, especially its beauty, comes from. I think that there are two things that are directly linked to that preservation: Firstly architecture, created by men in order to protect himself from wind, weather and nature, and secondly religion, created by men in order to protect himself from his own mind, from himself, to protect himself psychologically.”

Flemming's personal life has been nomadic. The Sao Paulo native lived in Brazil, the US and Portugal as a child. In the 1980s, he became well-known on the Sao Paulo art circuit and then moved to New York. For over a decade, he's been based in Berlin.

He seems to have found a perfect home in Prenzlauer Berg. The trendy neighborhood seems to resemble a village. That's because Flemming is well-known here and people strike up a conversation with him wherever he goes – whether it's in his studio, the café he frequents, or the Vietnamese restaurant where he eats the same tofu meal almost every day.

For Flemming, it's exchanges such as these that provide a much-needed context and a favorable environment for art. Flemming celebrates this diversity and communication in ‘Alturas’ (Heights), a series he started in 1988 and is still working on. 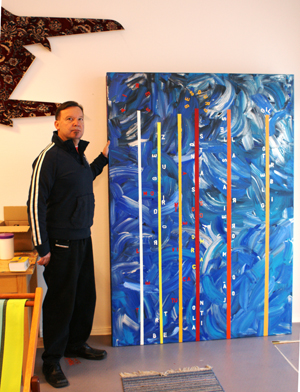 Each canvas features six or seven vertical and colorful straight lines of different sizes, accompanied by names. These are records of the exact body height of celebrities from a range of cultural fields. These people, who have visited Flemming’s atelier, include Brazilian musician Gilberto Gil, actress and cabaret artist Marianne Saegebrecht, and German actor Bruno Ganz among others.

“The result is a concrete and geometrical canvas therefore it is absolutely not abstract. It undoubtedly is conceptual, but extremely realistic,” Flemming says.

The work shows several persons next to each other and talking to each other. It emphasizes that culture only exists with several people involved, with differing points of view in different fields, talking and respecting each other.

Alex Flemming manages to seamlessly mesh the symphony between life and work in his art. His work is suffused with critical thinking and a strong political conscience. Berlin - with its blend of contemporary life and history, its cosmopolitan and provincial feel - seems to provide the perfect setting for it.