The coup by Augusto Pinochet against Chilean President Salvador Allende on September 11, 1973 had far-reaching consequences. It sparked the biggest migratory wave in Chile’s history.

Roughly 7,000 Chileans arrived in Germany, fleeing from the dictatorship. Approximately 4,000 were taken in by the Federal Republic of Germany while Communist East Germany (GDR) granted political asylum to 3,000 Chileans. 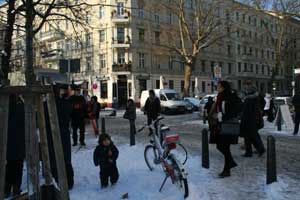 It was the first time that German society in both states came into contact with a large group of exiled Latin American politicians. For many Chileans, their escape to Germany was their first ever journey abroad.

It was during the Lufthansa flight that brought him to Germany in late 1974 that Isidoro Bustos Valderrama learned of his final destination – West Berlin.

His motivation to leave Chile is one he shares with thousands of his countrymen and women.

“It was not a voluntary decision, I left Chile after being imprisoned for the second time, thanks to the effort of many people,” he remembers.

But if he was expecting an empathetic welcome in Germany, he was mistaken.

“When I arrived in Germany, I noticed that there was a very negative perception among the people of what was happening in Chile. A large number of Germans supported the persecution by the dictatorship,” he says.

Bustos Valderrama was a civil servant in the ministry of justice during the Allende administration. He was arrested by Pinochet’s secret police, the National Intelligence Directorate (DINA), who locked him away in different places for more than a year. He saw firsthand the dreaded prison camps and the infamous interrogation centers set up by the Pinochet regime. He finally managed to leave the country thanks to a pressure campaign by human rights group Amnesty International.

“My first responsibility was to create solidarity for Chile, fight the illusion that there was a revolution going on and that armed resistance would eventually succeed in defeating the dictatorship,” Bustos Valderrama explains.

A number of diverse Chilean solidarity groups sprang up in both German states. Some of them thought that they could keep up the fight and topple the Pinochet regime from Germany, says Sebastian Thies, a professor at Bielefeld University.

In that West German city, there was a politically active Chilean community in the 1970s and 1980s, associated with the Evangelical Church. Thies said some political refugees even underwent military training in the GDR. Some were even sent to Cuba for further training.

One of the most notable figures of the Chilean community is the writer Antonio Skármeta. He arrived in West Berlin in 1975 as a research fellow of the German Academic Exchange Service (DAAD).

The grant helped him write his first novel “I Dreamed the Snow was Burning” (Soñé que la nieve ardía). Skármeta returned to Berlin as ambassador to Chile in 2000 and held the office until 2003.

Chile began the transition to democracy in 1990, led by President Patricio Aylwin. That was the beginning of a reverse migration as the vast majority of exiles returned to Chile.

But Germany still remains home to a Chilean community, the largest Latin American group after Brazilians and Cubans.

An estimated 10,000 Chileans live in Germany, mainly concentrated in the cities of Berlin, Hamburg, Cologne and Munich. It includes second generation Chileans - those born in Germany to Chilean parents.

Today, it’s no longer political refugees making their way to Germany. According to Felipe Ramírez, the Chilean Consulate General in Munich, the current Chilean migration is made up by students who attend German universities, Chileans whose partners live in Germany, and a temporary migration of professionals who work for German companies.

There is also a small group of people born in German communities in Southern Chile, who speak German and possess both passports. “Mostly it’s young people coming to study, work and try their luck,” Ramirez says.

Citizen of the world

Carlos Novoa is one of them. The philosopher and teacher visited Berlin for the first time during the summer of 2001. He had German friends he had met in Santiago de Chile, where he was born.

Carlos Novoa is one of them. The philosopher and teacher visited Berlin for the first time during the summer of 2001. He had German friends he had met in Santiago de Chile, where he was born.

Despite the vast geographic distance between Berlin and Santiago de Chile, he sees a connection between the two that allows the idea of “a universal citizenship, like a Global Village, being able to connect to several places at the same time.” The professor of philosophy studied film sciences and education science and hopes to return to his country and teach at a university.

Novoa chose to study philosophy because he’s passionate about it. The young professor regrets that in Chile, young people often opt for more lucrative careers. “Not everything in life is merchandise, not everything can be negotiated on the market,” he says.