Chilean architect Ana Aravena Gross, who was forced to leave her country because of a military dictatorship, came to Berlin in 1994. Though life as an exile hasn’t been easy, over the years Ana has come to cherish her adopted home. 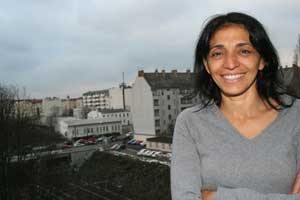 Ana Aravena Gross didn’t speak any German when she arrived in Berlin in 1994. But that didn’t stop her from easing into life in the then recently unified German capital.

Berlin, which was in the throes of a post-reunification construction boom, held a lot of promise for Ana. The then 29-year-old was accepted to study at the city’s prestigious Technical University. Along with her 18-month-old daughter Luna, Ana had come to Berlin to be with her boyfriend, a German architecture student. The two had met in Moscow in 1991 during a European student conference.

Ana had left behind a painful past. Born in Valparaíso, central Chile in 1964, she was forced to leave her country during Augusto Pinochet’s military dictatorship.

“I was arrested with my then husband, and during that arrest we were advised to leave the country for a while until the situation calmed,” she remembers.

In 1987, Ana fled Chile and made her way to Madrid where she spent the next seven years.

The original idea was to spend one year abroad,” she says. “But by now I have spent 23 years away from Chile,” she explains with a soft Chilean accent.

The pain of exile

Her time in Madrid was full of difficult adjustments. Ana remembers those years with the pain of an outcast, forced into exile against her will.

Adapting to life in the Spanish capital wasn’t easy. Despite speaking the same language, the culture, she says, is very different. The toughest part was accepting that she could not return to Chile. For many years, the forced exile felt like an open wound to her.

“Two things made me feel uncomfortable there,” Ana says. “Firstly, I was forced out of my country. Secondly, Spain and Chile don’t have much in common. The language unites us, but still there are many differences.”

While the migration from Chile to Spain felt like a real culture shock, the move from the Spanish capital to the German one was much easier. This time, Ana was much more motivated since it was her own decision to move to Berlin.

“I love living in Berlin, I don’t know if I have found my new home, but my life is good here, I enjoy it. I feel good being a foreigner here,” Ana says.

“Maybe that is what made things difficult in Spain, where living as a foreigner is not that easy as they don’t have the cultural habit of welcoming strangers. Nonetheless, in Berlin I feel that I being a foreigner can offer many opportunities to others.”

The birth of her second daughter, Lara Malina, coincided with Ana finding a job at an architecture firm in Berlin. She’s worked there ever since. It was important that the job allowed her enough time to raise her newborn daughter.

“I don’t have job conditions like many other architects who work at night or on weekends. I never could do that because I don’t have a family that supports me in taking care of my daughters,” Ana says.

She works as a freelance architect and does not have a fixed schedule. It allows her to find a balance between her family commitments and professional life. Ana even rides her bicycle to work if she has the time.

The firm, Heinhaus Architekten, has four architects and specializes in designing energy-efficient housing. It’s an issue that has gained increasing significance since Ana first joined the company. Today, she says, it’s unthinkable in Germany not to consider ways to lower energy consumption when building.

“The last two projects we worked on were planned and built with a standard called ‘passive house’ which includes zero energy consumption,” she explains.

Ana enjoys her job immensely. Her workplace is close to her home in Berlin’s eastern Prenzlauer Berg neighbourhood.

At home, the family speaks both Spanish and German. Ana’s partner Gerald, who’s German, has already learned to speak Spanish. Older daughter Luna attended a Spanish-German bilingual school and even did an internship in Chile. And Ana’s younger daughter Lara Malina too went to a bilingual kindergarten.

While Luna is currently busy preparing for her final year school exams, Lara Malina has more time and practices Karate, like her mother. But music is undoubtedly the prime family pastime. Both girls play the piano and Ana sings in a choir, where she has found many friends from different Latin American countries, with whom she tries to create an “accent-free space”.

Ana’s parents, Margarita and Harry, visit Berlin once a year. Shortly after her departure from Chile, Ana’s parents and her sister immigrated to the United States. They now live in New Jersey.

‘Returning to Chile is a huge possibility’

Ana likes cooking and whenever she finds the time, she enjoys a good read. She recommends authors Roberto Bolaño, Luis Sepúlveda and Roberto Ampuero as well as the historic novels of German writer Lion Feuchtwanger.

After 16 years of living in the German capital, Ana has come to love her adopted home.

“Berlin is a very special city and I love the fact that my daughters grew up here,” she says. Ana says the long-festering wound of exile is now gradually healing, forming a scar after all these years. She’s not ruling out returning to Chile.

“I feel happy, but life is a process. I don’t know if I will still be here in 10 years. My future is open, with many opportunities,” she says. “It’s not like my intentions are to return to Chile tomorrow, but returning is a huge possibility,” she concludes.