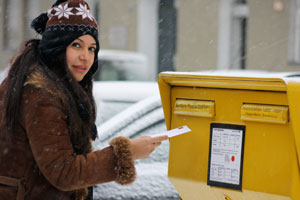 “Getting to Germany is not easy,” says Margarita Manjarrez Herrera, the Colombian consul in Berlin. “The language is difficult, the travel arrangements are expensive, and getting a visa is complicated.”

Since 2001, Colombian nationals need a visa to enter the Schengen zone, a group of European countries that have signed up to an agreement to enable passport-free travel. Given the bureaucratic hurdles, most immigrants to Europe tend to head to Italy or Spain – both countries with a warmer climate, a culture similar to theirs and less rigorous immigration laws. Germany doesn't belong to that list.

“Germany usually is not an option for the job seeking emigrant with little money,” Manjarrez Herrera points out.

”Colombians come here because they were educated in German schools, or because they have family ties to Germany. Some have an employment contract, or, as many of them do, they participate in student exchange programs.”

According to Germany's Federal Statistics Office, 10,182 Colombians lived in the country in 2009. However, these numbers neither include naturalized citizens (313 persons in 2009), nor the unknown number of people living in Germany without a residence permit.

A high percentage of Colombians living in Germany consists of students. Among Latin American countries benefiting from grants offered by the German Academic Exchange Service (DAAD), Colombians form the third biggest group, behind Brazilians and almost on par with Mexicans.

As for asylum seekers, Colombians are in second place behind Cubans. That amount however is insignificant - only 17 cases of asylum-seeking Colombians are currently being processed in German agencies.

But there is also an extreme gender imbalance among those coming over from Colombia – around 70 percent of all Colombians in Germany are women, most of them married to German nationals.

Many Colombians approach the consulate because of marriage-related problems. “It is mostly about separations or custody of the children. Many Colombians feel disadvantaged by the German justice system when they get divorced,” Manjarrez Herrera. “Sometimes, we also deal with cases of domestic violence.”

Contrary to a widespread notion about Colombians being involved in criminal activity, “the number of arrested Colombians is very low,” according to Manjarrez Herrera. German government figures show that only 139 out of over 540,000 convicted persons in 2009 were Colombians.

And their numbers in prostitution and trafficking have dwindled as well. Juanita Henning, one of the founders of Doña Carmen, an organization that defends the social and political rights of prostitutes, has studied the situation.

“In 1996, 71 percent of women prostituting in Frankfurt were Latin Americans, of whom 42 percent were Colombians and 90 percent were residing here illegally,” Henning says.

But the introduction of the entry law requiring visas in 2001 has led to a drop in the number of Colombian women, who were overtaken by women from the Dominican Republic.

After three massive police raids in 2006, the number plummeted further. “Nowadays, i don’t differentiate between nationalities,” Juanita Henning says. “ 47 percent of prostitutes are from Latin America, of which 99 percent do have legal documents.”

During the last century, there have been large waves of emigration from Colombia. The first in the 1960s and 1970s was mostly to the United States. The second, in the 1980s, was aimed at countries like Venezuela and Ecuador. And in the 1990s, Spain was mainly the target of Colombian emigration.

Experts say there could soon be a fourth migratory movement by people of Colombian origin. “It’s early to foresee, but there is some movement going from crisis-stricken EU countries like Spain, Italy or Greece towards strong economies like Germany,” Manjarrez Herrera explains.

“Furthermore, a new Lufthansa flight connection between Frankfurt and Bogotá too effect on October, 31st. This could open new doors to immigration, be it legal or illegal.”