Succeeding against all odds in Berlin 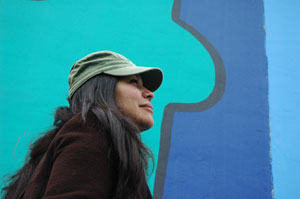 Colombian-born Jacqueline Rojas Villalobos has lived in Berlin for more than 20 years. She's come a long way from being an immigrant with no knowledge of German to becoming a successful dentist.

It comes as little surprise that the cult Hollywood series “Rocky” count among Jacqueline Roja Villalobos' favorite films. The Berlin-based dentist of Colombian origin says she's inspired by the grit of the boxer played by actor Sylvester Stallone and the movie's famous song “Eye of the Tiger” about rising up to challenges and being a survivor.

“I always try to have an ‘Eye of the Tiger,’ a goal that motivates me to march on,” she says over lunch at her favorite restaurant in Berlin.

Rojas was just 20 years old when she arrived in Germany in 1990. She had with her her 13-month-old daughter. She had interrupted her studies back home in Colombia to follow her then husband to Germany. He had received a grant from the German Academic Exchange Service (DAAD).

Two years later their relationship broke up, but Rojas proved that she was a fighter. She resolved to stay on and carve a life for herself in Germany despite the fact that she couldn't speak German and couldn't pursue her studies in the country at the time.

“Many people didn’t understand it. They asked me: ‘What are you trying to do? Save your marriage?,” she said. “And I replied: ‘No, I am going to learn German. Learning the language was my first goal.” she remembers.

It wasn't easy. It involved hard work and dealing with setbacks and disappointments – all in a foreign country. But Rojas didn't think of giving up. Much like her father who came from a modest background and went on to become an entrepreneur, she was determined to succeed.

In Germany, Rojas graduated in dentistry and soon joined a practice in Berlin’s upscale Charlottenburg neighborhood.

“I consider it my mission”, she says. She says she devotes at least 70 percent of time to work. That doesn't leave much time to spend with her family.

“I try hard to use the other 30 percent for my private life, but it’s not easy. My daughter ended up accepting that there are days when I get home really late because three more patients came to my office,” Rojas says. “The customers ended up learning that when I say ‘please wait for five minutes, I will call you back,’ they might wait for another three days. And my boyfriend, well… I hope he understands that sometimes I might forget our date…”

Rojas’ marriage did not survive the strains of migration. Her current boyfriend is from Argentina, but in between, she was married to a German doctor for seven years.

“I owe him my nationality, and so much more. We shared a passion for medicine. And he looked a lot like George Clooney in 'Emergency Room!” she says, laughing out loud.

Rojas says her time in Germany has taught her a lot about her own Colombian origins.

“One day, my second husband told me that we Colombians are very intolerant, that we also needed to adapt and not wait for everyone else to adapt to us. I was offended, but now I understand what he was trying to tell me,” Rojas says. “We are raised that way. In our country, each person is a somebody. All of a sudden you go to Europe and you find yourself being just a number, one more immigrant. That’s why I tell my patients: ‘Don’t tell me what you were over there, tell me what you are here and now’,” she says.

Jacqueline Rojas Villalobos says she treats people from all walks of life in her practice – from cleaning ladies to ambassadors and celebrities who invite her to exclusive parties.

After more than two decades of living in Germany, Rojas says her Colombian roots remain important to her and she maintains ties with her home country. At the same time, she says she feels like a Berliner.

“I try not to be excessively Latin nor become too German, I try to take the best from both cultures.”