Indian IT manager Anand Narayanswamy first came to Germany in the early 1990s, drawn by the country's cutting-edge technology. He says Germany has made strides in making immigrants like himself feel at home.

It was a Mercedes Benz car that helped kickstart Anand Narayanswamy's dream of making it to Germany. Growing up in southern India, the IT manager was fascinated by his neighbor’s German-made auto. “The car was so sleek and well-made. I had never seen anything like it before,” he remembers. Dressed in an immaculate suit, the 35-year-old who prefers to be called Anand, leans back in his chair in his Munich office and smiles. “I made up my mind that I would one day visit this high-tech country.”

It wasn't a decision he took lightly. At a time when most of his friends were aspiring to study in America, Anand signed up for German classes while still at college in India. In 1993, he landed a sales job in the western city of Duesseldorf. But he wasn't prepared for the weather. “It was actually horrible in the beginning. It rained all the time in Duesseldorf. Everything was wet and gray. All I wanted to do was go back to India,” he laughs. He did however return. In 2004, he was hired by Siemens and moved to Munich. He now works in the southern German city as sales director for Indian IT company Tech Mahindra. 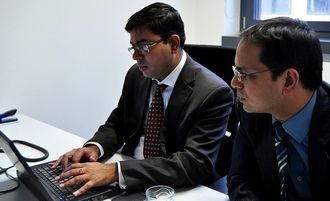 Anand’s fulfilled his goal of making it big in Germany. In 2001, he acquired a Green Card, making him among the first foreign workers to benefit from a scheme meant to ease a dearth of skilled labor. He’s also put down roots in Munich. Together with his Indian wife and two children, aged 8 and 11, he lives in his own house. The family has applied for German citizenship. Anand’s now used to the German weather and even relishes the winter so he can go sledding with his children. He says he’s noticed a change in perceptions of immigrants like himself. “Germany was a very closed society when I first came. But I think the country has traveled far in its acceptance of foreigners,” he says. India’s growing economic clout has also helped. 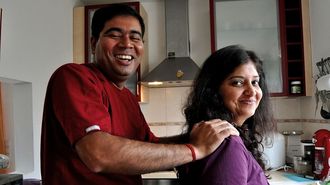 “When I first arrived, there was an old lady in my building who wanted to touch me because she had never seen a person from South Asia. I was really uncomfortable,” he says. “But now I mention I'm from India and even a taxi driver in Munich says 'oh you guys have made it big with IT and software.' I feel proud about that.”

But it's not just shifting German attitudes that have eased his acceptance. The long stay in Germany, Anand says, has also changed him. “I've become more punctual and disciplined like Germans. I pay more attention to detail. I've learned to say 'no',” he laughs. “Generally, I've become used to a coordinated, planned way of life.” But he admits he still has a hard time coming to terms with certain mentalities. “People I don't know are still very surprised when I speak German because I look different. That's when I feel like an outsider,” he says. “And sometimes, people can be very direct and say something unflattering or insulting. That’s difficult to take.” 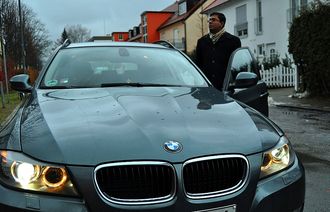 Anand's love affair with German cars is by no means over

The only thing Anand yearns for in Munich is the beach. His home city Chennai is located on the Bay of Bengal. “I miss taking walks on the beach or simply staring at the ocean when I need to clear my head,” he says. As for his original motivation to come to Germany, Anand’s now the proud owner of a BMW car. He insists it doesn’t amount to switching brand loyalties. “Whether it’s a Mercedes or a BMW, German cars are simply the best in the world,” he says.