“Rather than being nostalgic, I feel the need to bring Mexican things here so that the Germans get to know them.”

During his eight years in Hamburg, the Mexican Jorge Sánchez has left his mark on the local nightlife. His pseudonym as an artist merges his last name with the name of his favorite Hamburg suburb: DJ Sternsanchez. 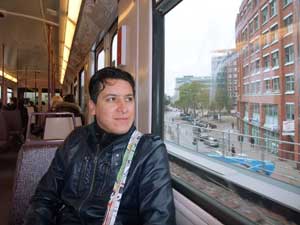 “Many immigrants to Germany are evidently desperate to find work to help put their life in order. Ironically, this anxiety makes it harder for them to find work and make friends,” Jorge Sánchez Meza explains without trying to sound critical. After all, the circumstances that brought him from his native Mexico City to Hamburg show that luck has always been on his side.

“In 1997 I met two German artists whilst working as a tourist guide for the German embassy in Mexico. Three years later, when I was travelling through Europe, they invited me to Hamburg in order to get to know the city. The friends I met during that stay offered me the possibility to work here. That’s why I was able to move to Germany in 2002. Without a stable job, I wouldn’t have been able to stay in this country,” the 32-year-old recalls.

Luck on his side

Jorge admits that the kindness extended by his friends in Hamburg allowed him to leave for Germany with a sense of confidence. It is a kind of optimism, which was shared by many immigrants who came before him halfway through the last century, and which is now lacking among their children and grandchildren. “Immigration is a complicated topic,” he says, stressing that until now, he has never been discriminated against for not having a typically German phenotype.

“Maybe it’s because I’m very lucky,” he ponders while thinking about the issue. “I know that not all German families are disunited, but when some of my friends tell me that they haven’t seen their parents or siblings for more than ten years, I ask myself: how can Germany integrate immigrants if their own society is so miserably integrated?” Two years is the longest period Jorge has spent without visiting his relatives.

This Mexican didn’t leave everything to fate. His enterprising spirit rewarded the faith his friends put in him, and his circle of friends grew continually. As the Germans say, you don’t get anywhere without the right contacts. “In 2005 I started working as a barman in the BP1, a bar whose owner I had met in Mexico. I took care of the music there, and as they liked what I was doing, I was asked to be a DJ almost every weekend, not only there but also in other night spots.”

That was just the beginning. Jorge has volonteered for the International Youth Association Europe-Latin America (IJEL), taking young Germans to Mexico and guiding Mexicans through Hamburg in order to encourage cultural exchange between both countries. He brought Mexican bands such as “Kenny & Los Eléctricos” and “Inspector” to the Latin American Festival and organized their concerts all over Germany. He is also the manager of four Wrestling professionals, Mexico’s favorite sport after football.

Moreover, successfully joining ‘Kenny & Los Eléctricos’ with the German band ‘Der Fall Böse’ for the recording of a song in both Spanish and German, he also organized the German band’s tour through Mexico as well as the presentation of a jazz band in a Hamburg 4-star hotel.

“I have always thought that Hamburg needs more live music,” Jorge maintains, whose pseudonym as an artist, DJ Sternsanchez, merges his Hispanic last name with the name of his favourite neighborhood: Sternschanze (star ramp).