Brazilians make a mark and not just on the soccer pitch 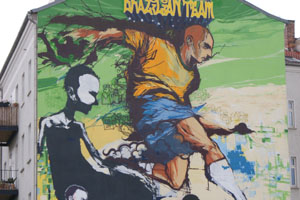 Though there are no consistent figures, statistics show that Brazilians – though still relatively small – are a fast-growing group. In 2008, the German Federal Statistics Office reported some 31,000 Brazilian nationals in Germany. Ahead of the 2010 presidential elections in Brazil, there were 2,363 voters registered in Berlin, 3,037 in Munich and 3,133 in Frankfurt.

So, what attracts them to the country of Bach, Goethe and Beckenbauer? A majority, no doubt, are descendants of Germans who emigrated to Brazil in the 19th and 20th centuries. Their arrival in Germany marks the reversal of a nearly 200-year-old trend.

For many, the journey involves rediscovering their roots and coming full circle.

Aside from the personal journeys to reconnect with their roots, relationships with a German partner or academic and university exchanges are common.

German universities, which still enjoy a solid reputation worldwide, are often the go-to place to study for the young and ambitious in Brazil. In addition, growing economic ties between Brazil and Germany have brought many Brazilians to Germany for work.

Many are thus driven by a romantic search for a mythical country - the Germany of their idols Nietzsche, Richard Wagner, Pina Bausch, Heiner Mueller or Karl Marx.

Adapting to a German life

But adapting to a life in Germany isn't easy. The transition involves grappling with a new mentality, different codes of communication, cold weather and a new language.

Many newcomers turn to websites such as “Vivir en Alemania”, “Brasileños en Alemania”, “Web-Brasil,”,“Salir de Brasil” or the information sections of DW_LINK_SHORT to connect with other expats. The portals help Brazilians ease into German life and offer a platform to share experiences and exchange tips.

Practical help ranges from listing affordable German courses, providing tips to tackle bureaucratic problems to the best places to find Brazilian delicacies such as black beans, chayote and guayaba. As for caipirinha, Brazil's national drink, it's long become standard fare at Germany’s bars and restaurants, right next to classics such as margarita, piña colada or sex on the beach.

Making a mark beyond the ball

But many Germans still associate Brazil with soccer. After all, the country's Bundesliga or top league is full of Brazilian players - Grafite, Cacau, Diego, Dedê and others.

But Brazilians in Germany are by no means active just on soccer pitches. A significant number works in all professions, from trade and gastronomy to science and teaching. And they have a strong presence in the cultural field too – whether it's arts, theater, cinema, classical or popular music.

Brazilians have also made their mark in theater – as evinced by film shows in Cologne, Hamburg and Stuttgart – as well as dance as seen in regular events such as the ‘Move Berlim’ festival and choir groups specialized in popular music from Brazil.

These aspects don't just reflect a strong and vibrant Brazilian presence in Germany, but also a strong German interest in everything that comes from Brazil.

And those ties are expected to get stronger. Brazil is a big player in renewable energy and is set to host the 2014 Football World Cup as well as the 2016 Olympic Games – a fact that German companies are looking to capitalize on. The emerging South American power is likely to attract plenty of economic and political attention from Germany in the years to come.

Brazil's growing global clout has also led to a status upgrade for Brazilians migrating to Germany. Now, Brazilians seeking a permanent residence permit are no longer classified as potential “economic refugees” from Third World countries. That means they no longer have to deal with elaborate bureaucratic hurdles, considerably easing the integration of Brazilians in Germany as compared to previous decades.

For instance, since 2009, Brazilians already in Germany can apply for a student visa or even a permanent residence permit without the need to go back to their home country first. A recent agreement also allows Brazilians who work in Germany to account the years of labor in Germany for retirement pension in Brazil and vice versa.

Germans and Brazilians will have several opportunities to get to know each better in the years and get rid of national cliches and misconceptions that sometimes still persist on both sides.